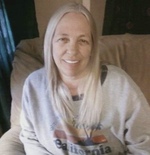 On March 6th 2022, Ms. Deborah LeAnn (Turner) Newberry departed this life at home surrounded by a multitude of family and friends at the age of 65. She was born in Mendota, California on October 2, 1956, the eldest daughter of William B. Turner and Doris Lee (Powell) Turner.

Deborah grew up in Jackson County in Arkansas for most of her entire life. She was an LPN and worked over 10 years at Regional Healthcare in Newport alongside Dr. Jerry Frankum, who she often talked about how much she learned from him. In her later years, when she was no longer able to work, the greatest joy of her life took place. She became a grandma, but was never called that because she said that “makes you old”. So she became: Momma Deb, Granny, Nana, Ganny. This was her greatest joy in life. If you saw her, you saw a kid on her lap. She also enjoyed fishing, working puzzle books, watching tv, BBQ’s and mowing. She was of the Baptist faith and her last regular church attendance was at the Transformed Church of God in Paragould.

She is preceded in death by her parents, an infant son, Jimmy Ray Newberry Jr, one brother, William Scott Turner, her grandparents, Eddie and Hazel Powell and CW and Lillian Turner, a granddaughter, Mackenzie Hinckley, a son in law, Ben Forbs, 3 great grandchildren, Kalleb Newberry, Trey Burns, and Kaden Newberry and her two dogs, Tiny and Bearman.