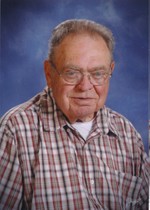 Mr. Donald Thomas “Don” Plessinger, 85, of Harrisburg, Arkansas departed this life on Sunday, March 14, 2021 at his home in Harrisburg, Arkansas. He was born January 5, 1936 in Blocher, Indiana the son of John and Flossie (Wolff) Plessinger. Don was preceded in death by his parents, one brother, Bill Plessinger, and one sister, Creole Owens. He is a member of VFW 4679, American Legion 14, Fleet Reserve, and the Organization Knight of Columbus 1702. Don served his country for twenty years in the United States Navy, and was awarded many medals and citations including: National Defense Service Medal, Navy Good Conduct Medal (4 times), Vietnam Service Medal, Presidential Unit Citation w/Bronze Star, Vietnam Campaign Medal, Navy Expeditionary Medal, and Marine Corps Expeditionary Medal. He also enjoyed fishing and spending time with family and friends. Don is survived by his wife, Kathy (Pounders) Plessinger of the home in Harrisburg, two sons: Paul Plessinger of Atoka, Tennessee and Jimmy Plessinger of Coats, North Carolina, one daughter, Cathy Miller of Corpus Christi, Texas, six grandchildren, and 6 great-grandchildren. A Memorial Service will be held Friday, March 19, 2021 @ 11:00 A. M. at the Blessed Sacrament Catholic Church in Jonesboro, Arkansas with Father Alphonse Gollapalli conducting the service. The Plessinger family wishes are Memorials be made to the charity of your choice. Arrangements are Jackson’s Funeral Home
Printable
Share on Facebook
Recently Shared Condolences
Leave a Condolence
View All Condolences
Recently Lit Memorial Candles
Light a Memorial Candle
View All Candles
Recently Shared Stories
Share a Story
View All Stories
Recently Shared Photos
Share a Photo
View All Photos